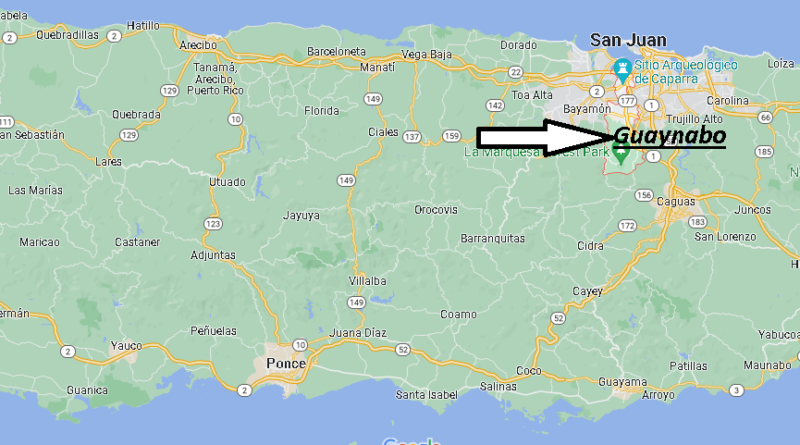 What country is Guaynabo Puerto Rico?

Guaynabo is known as the “first town of Puerto Rico“, ”the city of the conquistadors“, ”the capital of sports“, ”the ruins of Caparra“, and ”the town of Carnival Mabó”. Its patron saint is Saint Peter Martyr of Verona.

This municipality is located on the north coast of the island. It is bordered on the North by the town of Cataño and the Bay of San Juan; on the South by Aguas Buenas, on the east by San Juan and on the west by Bayamón. It is formed by flat and humid terrain.

The relief of its territory can be divided into three areas. The first covers its northern area and belongs to the region known as Llanos Costaneros del Norte. Towards the center of the municipality there are several mogotes. Finally, Guaynabo develops a mountainous area in its southern area.

The economy of this municipality is mostly industrial and commercial. Its factories include dairy food processing, wheat and other grains, and the manufacture of metal, paper, textile and chemical products. Other economic lines are the provision of services and construction.

Guaynabo was founded in the year 1769, after having gone through many anxieties on the part of its founders who fought arm in arm to get rid of Bayamón, since since December 14, 1764, the go-ahead was given to found the town. Previously the city of Guaynabo was known as Buinabo. The Taíno name Guaynabo means “Here is another place of fresh water”, that is, the origin of Guaynabo is Indian-Antillean. It was the lordship of the Cacique Mabó.