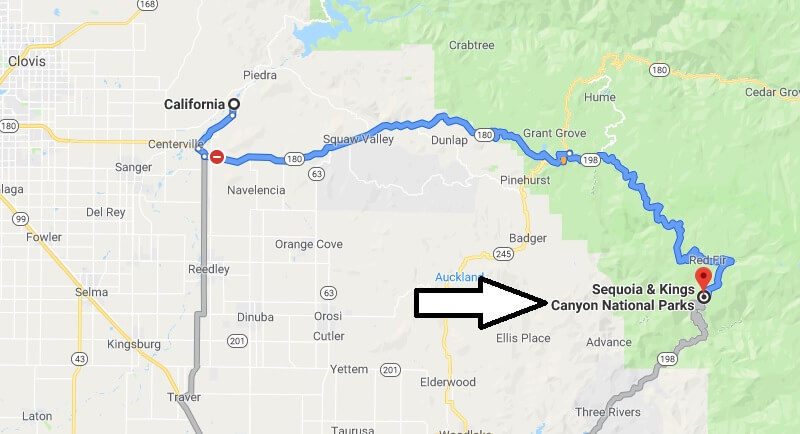 State Of California
Kind Of A National Park
Location both Parks are adjacent to each other. They are located east of Fresno in the mountain area.
founded in 1890, Sequoia Park is the second oldest national park in the United States.
Kings Canyon originated in the General Grant National Park, which was also set up in 1890.
Brief information the Sequioa Park was founded to protect the forest of giants (mammoth trees). Mount Whitney (4,418 meters), the highest mountain in the U.S. outside Alaska, is located at the Eastern Park border.
The Kings Canyon is one of the deepest mountain gorges in the country
Visitors annually 1,457,000 visitors (approx.)

What city is Sequoia & Kings Canyon?

Size Sequoia about 1,600 sq km, Kings Canyon 1.840 sq km
Opening time open year-round; in Winter, however, in southern Sequioa, the gravel road over Silver City to Mineral King ebso is closed as the CA 180 in Kings Canyon, which leads down to the Valley. Kings Canyon is therefore not accessible in Winter.
Arrival both Parks are only accessible from the West. From US 395, there is no connection !
Starting points are Fresno (Bus, rail and air transport) and Visalia. Both places are starting points for guided tours.
Otherwise both Parks are not accessible by public transport. There is no public transport in the Kings Canyon, and in the summer, a Shuttle bus is available at the Sequioa.
Admission fee, National Park Pass and Golden Eagle Pass will be honored
Facilities a total of three visitor centers
together more than 200 km of roads and 1,400 km of hiking trails
several campsites and one Lodge per Park
Food can be purchased at various points, no gas station in the Park
The main attractions worth experiencing are the mammoth trees (Sequioas). Individual trees should be up to 2,500 years old.
Also worth seeing is the huge granite rock Moro Rock, from which you can enjoy a famous view.
Crystal Cave and Boyden Cavern are worthwhile caves.
In the Parks you can meet Coyotes, black bears, rattlesnakes, porcupines, chipmunks and theoretically mountain lions.
Notice in the Parks there is no possibility of exposure to dangerous animals (including snakes).

How do I get to Sequoia & Kings Canyon